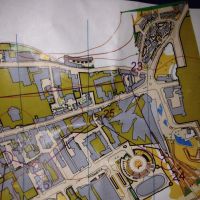 A few TAY members took part in the Edinburgh Street Race and Sunday SoSOL event - the Edinburgh Big Weekend, and the first major race in the Scottish 2014 orienteering calendar. Despite the weather, some good results were achieved!

The Edinburgh Street Race is always a very high quality and popular urban orienteering experience organised by Edinburgh Uni OC. This year was no exception. Even with some heavy rain that affected earlier starters, it was another challenging race physically and technically. Courses started and finished at the Edinburgh Uni Sports Union at the Pleasance, and included Pollock Halls to the south and the Royal Mile and Scottish Parliament building to to the north (a building that has a unique shape on the map!).

The terrain and spirit of the event was superbly captured by a series of photos by Crawford Lindsay.

Craig Sloan was 3rd in the Young Junior Men course, Davie Frame finished 14th on the SuperVet Men course, and David Sloan was 23rd on the Veteran Men course. A great start to the Scottish Urban Orienteering League (SOUL) - next race in the League will be our own event in Perth in 3 weeks time!

On Sunday, the following day, was a South of Scotland Orienteering League Race over Arthur's Seat - and the weather took a turn for the worse with high winds accompanying the rain, adding to the physical challenge of the area. Despite this, there were some excellent results from TAY folk, with Neil O'Gorman finishing 7th on the Green course and Davie Frame continuing his recovery from injury by winning the Short Green course.

Results from both events are now available. 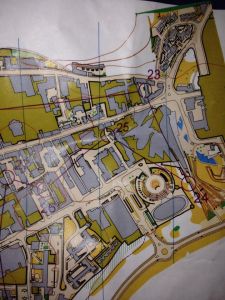